The hand-me-downs you really want

When a woman has a daughter, her wardrobe can have a second life. Meet the mothers saving their cherished clothes for their lucky offspring 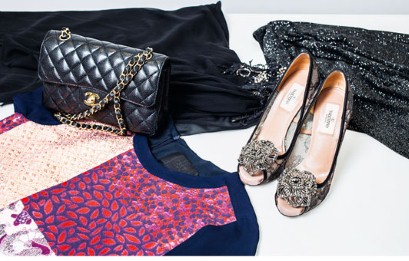 Discover some of the fashionable pieces that mothers are saving for their daughters Photo: Sophia Spring

Margo Marrone, 48, founder of The Organic Pharmacy , and Roxy, 16

Margo is saving all her clothes for Roxy. “All of them. Seriously.” In fact, Roxy is already wearing many of her mother’s clothes from about 10 years ago. “Some of them no longer fit me, sadly.” Roxy started wearing her mother’s boots and trainers two years ago. “There’s only one pair of Valentino heels that are out of bounds to her,” Margo says. “I look at them with such love. It’s silly, but I do.”

Margo began “archiving” her clothes when Roxy became a teenager. “I’d always thought about passing on my handbags, that seemed obvious.” And nice bags they are too. Margo recently gave Roxy her first ever Chanel 5.5. “It’s everyone’s dream to have their first Chanel– I was so pleased to be able to pass it on to her now.”

In years to come, Roxy will be able to pick and choose from “some very dressy bits” of her mother’s, such as a pastel garden-party dress and a striking black and yellow full-length gown – both by Dolce & Gabbana– and a black and silver Marchesa one-shoulder evening gown. There is also a satin Prada evening bag with gold clasp and a Diane von Fürstenberg metallic evening coat. These treasures are stored in garment bags in Margo’s wardrobe.

“Roxy’s always had an individual style. I didn’t think she’d want to wear any of my things now,” she says, “but once she expressed an interest I thought, why not? I am happy not to throw out my things but for them to have a second lease of life. She found a Gucci top that I wore to a Cosmetic Executive Women event where I won an award. She wears it out with friends. She’s such a cool kid. Seeing my clothes reinvented is wonderful.”

Roxy: “I love wearing Mum’s clothes,” Roxy says. “I feel good in them – but there is also a lot I wouldn’t wear.” Roxy mainly borrows bags and shoes, and they have joint dibs on a red Louis Vuitton during the day and a small sequinned Dolce & Gabbana clutch at night. Roxy favours classic colours – navy, black, grey and white – but mixes them with wilder accessories. “I love Mum’s Miu Miu glitter boots.”

In Roxy’s peer group it is perfectly normal to borrow things from your mother. What about the items that are in storage for her? “I love black and yellow together so the Dolce & Gabbana dress will be good, when it fits. But the Marchesa is so not my style. I can’t ever see me wearing that.”

The Mills family cherish clothes. They all enjoy hunting in charity shops or at Portobello Market or in the vintage shops along Camden Passage in Islington, London. And Martha and Loris wear many of the clothes that their mother Johanne wore when she was little.

“The girls love the Clothkits pieces [dressmaking kits that were particularly popular in the 1970s] especially,” Johanne says. Johanne herself wears items from her parents – a quilted cotton waistcoat of her mother’s and a blue silk baseball jacket from her father.

Johanne is mainly keeping pieces that she or her partner, Rory, a textile designer, have worked on. “I’m really interested in craftsmanship – but it’s not a legacy exactly. You’re just always proud of the things you have designed.”

She puts the clothes aside in drawers in her wardrobe. The box of delights that the girls can look forward to contains 15 years of work by Johanne and Rory – including a pair of Giles Deacon fabric shoes, a collection of spotted silk Gucci scarves and handkerchiefs, a fantastic tiered cherry-printed Sonia Rykiel skirt, and some printed Luella dresses that are bold and bright in silks and cottons. There are also fabric samples, T-shirts and bags.

From Johanne’s own vintage collection there’s a beloved black crêpe Ossie Clark shirt with a Celia Birtwell print. “I found it for a bargain price many years ago and have fond memories of wearing it on many special outings.” There’s a huge cream Courrèges coat that is carefully guarded from little fingers, a quilted Chanel denim skirt that is smocked and has stitched details. In addition there is some modernist jewellery with oversized raw and cut crystals. “But I wouldn’t want the girls to feel that they would have to like these things. I really want them to find their own identity.”

She is keen to add, “I like the Ossie pieces as much as the things we have worked on. It’s about the places you wore them, a special wedding you attended, a different time, and the fact that it’s a beautiful cut and print. For me they are memories of a younger time, having the kids – it’s all imbued within that. It’s like treasure.”

Martha: Already with an individual style, Martha enjoys wearing her Arsenal football strip with Nike high-tops in navy and green. “I like going to charity shops for something unusual, special and cheap,” she says. “Some of Mum’s clothes are a bit weird, some are nice. I like her red cord dress and lilac scout’s rucksack.”

Loris: “I love patterns and I love shoes,” Loris says. “I only dress up in her high heels, though, and I never trip. I take them off when I go down the stairs.” Loris loves going through Johanne’s jewellery box and wearing her dress from when she was young. “It’s red, with ribbons and birds and houses all over it,” she says. “Mummy is an artist and she designs things for clothes that I would like to have when I am bigger.”

Su Mason , 65, who sells vintage fabrics and textiles, and Romilly, 32, editor-in-chief at avenue32.com

Su Mason’s job allows her to pick up all sorts of wonderful pre-loved clothing. She started saving pieces for her daughters, Cleo and Romilly, when they were in their early teens. “My mother handed down things to me and I’ve just continued the tradition,” Su says.

A special piece is a cream and brown Biba trouser suit that she wore to a good friend’s wedding in 1973. “Nobody wore a trouser suit to a wedding then, I was the only person in one. It has extremely wide trousers and a very fitted, long jacket. I wore it to a 60th party recently, as I can still get into it, and Romilly’s used it on some fashion shoots that she’s done.” There is also a pretty lace blouse of her mother’s, remnants of lace from her grandmother, a floral Vivienne Westwood blouse and a lot of fur, including a short sapphire mink.

Su keeps everything in a small wardrobe, which Romilly uses as an alternative clothing resource. “It’s both fortunate and unfortunate that Romilly and I are a similar size in body and feet,” she says. “I always know that she’s borrowed something – usually around Fashion Week – but I have to go round and physically take it back.

“Some favourites have already disappeared – my much-loved Manolos, which are now too high for me – but my wardrobe was never a closed and locked thing, so since their teens both my daughters have always ‘borrowed’ bits. It started when they were both teenagers – trying to make a style statement for themselves.”

Romilly: “I’ve swiped an old cream silk Equipment shirt with a hood, a fabulous collared knit with a button-down front that was my gran’s, a vintage Yves Saint Laurent blazer, a Nicole Farhi trouser suit in black jersey,” Romilly says fondly. Her mother’s wardrobe is “an absolute pleasure”, she adds.

“I see Mum a lot and often I’ll be wearing something of hers that perhaps she hasn’t realised I have. She looks at me oddly for a bit and then says, ‘Where is that from?’ When I say it’s hers she is often surprised, as I might wear something very differently to how she does. She’s saving the furs,” she says. “But I know exactly where they are.” I have worked in the fashion industry for over 25 years. In that time I have worked with some of the best brands in the world. I was a womenswear buyer for 21 years. I bought designer denim and designer womenswear for Selfridge’s department store for 7 years. This involved travelling to all the fashion weeks across the globe and working with over 130 brands.

It’s a long one people! Talking you through some looks I’ve put together for my shoot this week. I’m launching a new business in the spring. More information coming soon! I can’t wait to share it with you all. Thank you to all my followers, old and new. Let me know which your favourite outfit is and why! A x ...

Smiling like a Cheshire Cat! This outfit was a betwixmas look. A dose of double leopard (my boys noisily disapproved) in an attempt to brighten up the mild, grey, rainy day. I like the texture mix of wool with the buttery leather and the splash of shine from my metallic flats. I’m so chuffed with this @raeyofficial coat. Nothing like a big pattern to make an entrance. Don’t be scared by statement coats - remember you take them off when you get to your destination. Quite frankly though, I’d like to keep this one on all day. ...

Happy new year! Here’s to a heathy, happy and prosperous new year. This is last night’s outfit (in my in-laws sitting room.)We partied well into the night with a bunch of old friends back in the shires. Literally loved every second, including the 🎤. Nothing like belting out a few floor fillers to end the evening on a high. Hoping you all had fun xx ...

Hope you’re all having a wonderful Christmas! I’m basking in a rare moment of quiet before everyone else gets up. I wore that beautiful @_aje_ dress again yesterday. Couldn’t resist it. I added an old @geraldinelondon_ headband for a bit of a party feel. It looked fabulous with the dress and some @lele_sadoughi crystal earrings for a bit of sparkle. Happy Boxing Day everyone! ...

Family Christmas outing into London yesterday! I’m not allowed to post any photos of the kids but they were there, behind us mostly! Went for a treat of a breakfast ( see stories) and then walked it off. Covent Garden has truly outdone itself with the festive decorations! Do take a trip there if you can. Starting to feel super Christmassy now. Are you? ...

Party time last night! Got proper glammed up for my dear friends 50th. Thanks for the cocktails and platters Miranda. Loved wearing this @_aje_ dress. It was too cold for a full shoulder reveal so opted to layer an old @cosstores superfine wool polo underneath. The necklace is stolen off an ancient @andotherstories dress and is so impactful I didn’t need to add spangly earrings. Threw on my new winter coat from @raeyofficial I’ve been searching for a big leopard print for years. So pleased I’ve found it. X ...

Spent a very happy hour this month going through Fi’s @feather_and_stitch shop. I did a Christmas party edit and my favourite everyday pieces. Something for everyone in there. It’s a Richmond institution and chock full of colour, print and unique Scandi finds. Fi arranges her rails in colour stories so it’s really a pleasure to shop. Add to that trainers, jewellery, socks and beauty gifts and you could nail half your Christmas shopping in one go! Let me know what you find. A x ...